Love is stronger Than Death!

Love is stronger Than Death!

Song of Solomon 8:6:  “Place me like a seal over your heart, or like a seal on your arm. For love is as strong as death, and its jealousy is as enduring as grave.”

The bride of Solomon is talking to him in this passage. She is saying “love is as strong as death”. Death is stronger than any other thing people know, because humanly speaking there is no cure discovered for death. Every one man dies and no one can escape from its power and strength. At the final outset, whatever power or strength a person possess doesn’t matter. Death finally conquers humans. Here she is saying love is equally strong as death. Because no one can stop the love of a person in his or her heart toward another. It’s stronger like death. It is said time and distance won’t destroy the love. She want Solomon’s love to be strong like death. She is asking him to place her like a seal over his heart or like a seal on his arm.

When God revealed His plan of redemption over the pages of the Bible,  we can look back and say love is even stronger than death. Bible says in John 15:13, “No one can have greater love than to give his life for his friends.” Of course death has power. But Jesus Christ defeated death by His love toward you and me. It was due to his unquenchable and unstoppable love toward you and me that forced him to be silent in front of His accusers and Roman power. He didn’t defend himself. In the Garden of Gethsemane, when Jesus said to the soldiers who came to arrest Him,  “I Am he,” they all drew back and fell to the ground!” Think about it, His word made the soldiers to drew back and fell down. He could have ran away to escape the army of soldiers who came to arrest Him. But He didn’t and He won’t.  One of His disciples tried to defend Jesus by using his sword and cutting off the ear of one of the soldiers. But Jesus healed the soldiers ear and and said this, “Don’t you realize that I could ask my Father for thousands of angels to protect us, and he would send them instantly? But if I did, how would the Scriptures be fulfilled that describe what must happen now?”( Matthew 26:53-54).  Jesus Christ was on a mission. He was sent from heaven with a rescue mission. He came to this world to pay off completely and fully your sins and purchase you to God with His own blood. Bible says in Isaiah 53:7-8, “He (Jesus) was oppressed and treated harshly, yet he never said a word. He was led as a lamb to the slaughter. And as a sheep is silent before the shearers, he did not open his mouth…. He had done no wrong, and He never deceived anyone. But He was buried like a criminal.”

Bible says to you and me, “But He (Jesus) was hurt for our wrong-doing. He was crushed for our sins. He was punished so we would have peace. He was beaten so we would be healed.  All of us like sheep have gone the wrong way. Each of us has turned to his own way. And the Lord has put on Him the sin of us all.” (Isaiah 53:5-6). This is why I said God’s love is stronger than death.

Bible says in 1 Corinthians 15:55-56, “O death, where is your victory? O death, where is your sting? For sins is the sting that results in death, and the law gives sin its power. How we thank God, who gives us victory over sin and death through Jesus Christ our Lord!” Bible says in Hebrews 2:15 says, “Jesus did this to make us free from the fear of death. We no longer need to be chained to this fear.”

My friend, Death is very strong. No human can escape from it’s conquering power. However, Jesus Christ defeated death by the unquenchable and unstoppable love toward you and me. Now God’s love is much stronger than even death. He conquered death and he rose again on the third day. He paid for your sins and now you can receive his forgiveness and eternal life. As you read above, you no longer need to be chained to the fear of death. For the wages of sin is death, but God gives you the free gift of eternal life in and through Lord Jesus Christ (Romans 6:23).  Because He paid it all for you.

Bible says nothing -neither death nor life, neither angels nor demons, neither the present nor the future, nor any powers, neither height nor depth, nor anything else in all creation, will be able to separate us from the love of God that is in Christ Jesus our Lord. (Romans 8:38). God’s love toward you stronger than any of these things listed above. Nothing is powerful enough to separate you from God’s love toward you in Christ Jesus.  He loved you eternally and nothing stops it. Yes, Love is stronger than death.

Lord Jesus, I believe you were silent in front of your accusers, soldiers and Roman Government who crucified you. You were silent because of me and you died in my place and rose again from the death. Now I believe you as my savior and Lord. Please come to my heart and save me. Amen”.

Thank the Lord for saving you.

If you prayed this prayer, please go to contact/prayer tab and send me a note. You can send your comments regarding this website as well. I will be thrilled to hear from you. 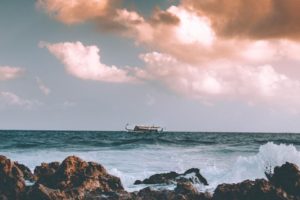 Midst of engulfing waters, overflowing rivers and blazing fires? Aware! You have promises to claim!

“When you pass through the waters, I will be with[...]