“Look,” “he (the new king) said to his people, “the Israelites have become far too numerous for us.” Exodus 1:9

God’s wonderful plan emerges out of challenges and sufferings.

The LORD God with His power and outstretched arm delivered children of Israel from the slavery in Egypt under the leadership of Moses and led them to the promised land that is the land of Israel. However, they were slaves and in bondage in Egypt for about four hundred years before God intervened in their life. During this time of slavery and sufferings, God increased their numbers. Children of Israel were only seventy in numbers when they came into Egypt. However, God multiplied them, and they became exceedingly mighty, and the land was filled with them. God was making a nation right there in their sufferings and slavery in Egypt.

Are you in sufferings? Are you under addictions and bondage? God who rescued the children of Israel can rescue you from your circumstances. His outstretched arm and mighty power are available to you for your help and deliverance, however, bad your situation maybe today. You may think you are in severe trials or problems.

However, God has a bigger plan right amid your difficulties, sufferings, and confusions, if you listen to Him when he reaches out to you.

Now after four hundred years, according to the promise God made to Abraham, the children of Israel are ready to come out of bondage and slavery and go into the promised land. They are prepared to form a nation and its government. This is how the nation Israel came into existence on the face of the earth. It was the fulfillment of God’s promise to Abraham in Genesis 12. Abraham’s family before he obeyed the living God in heaven was idol worshippers in Mesopotamia, and God intervened sovereignly in such a background and called Abraham and asked him to come out of that idol worship background and go to the promised land that He would show him eventually. He promised Abraham, “I will make you into a great nation, and I will bless you;… and all peoples on earth will be blessed through your seed.” Genesis 12

Beloved, I don’t know where you are and what background you are in today. However, I can tell you this- There is only one God, and He is the one who created the heavens and the earth. There is no other God out there by which you can receive blessings. He is the God who created man in His own image. The one true God loved us and sent his only Son to this world to save us from our sins and problems, to reconcile us with God the Father. He is Jesus Christ, the Son of God, who died for our sins, buried, and rose again from the dead. God is calling you to come to Him today in and through the person and work of Jesus Christ who loved you and died for all of your sins.

Abraham heard the call of God and left Mesopotamia, the idol-worshipping culture, by obeying the call of the living God. The same God is calling you today to come out of your background. It does not matter what nationality you are, what color you are, and what religion you are. The living God of the Bible calls you today to arise and come to His Son Jesus Christ. Bible says, “This is what the LORD, the God of Israel, says: ‘Long ago your ancestors, including Terah the father of Abraham and Nahor, lived beyond the Euphrates River and worshiped other gods. But I took your father Abraham from the land beyond the Euphrates and led him throughout Canaan and gave him many descendants.” He wants to take you from your current situation and use you for His glorious and beautiful purposes. Like God called Abraham, God is calling you today.

God was making a nation out of the grandchildren of Abraham. Abraham’s son was Isaac, and Isaac’s son was Jacob, and God gave a new name to Jacob, and the new name was Israel. Jacob or Israel had twelve children, and these twelve children are the twelve tribes of the nation Israel. Jacob and his twelve children went down to Egypt when there was a severe famine in the entire world. Joseph was sent there ahead of time, and God made him the prime minister of Egypt, though he suffered a lot in his young life. God had a plan behind all of Joseph’s unbearable sufferings. Joseph became famous in Egypt. The whole family of Jacob was reunited in Egypt and saved from famine and death because of Joseph, and all was well for some time. Then after many years, there arose a king who did not know anything about Joseph. He started persecuting the children of Israel who became numerous at that time in Egypt. He enforced forced labor and slavery on them. However, the more he oppressed them, the more numerous in numbers they became. The whole of Egypt was afraid of the Children of Israel because they multiplied and became numerous in numbers.

Beloved, during slavery, sufferings, and confusion, the sovereign God was at work. He was making a nation out of the children of Israel to fulfill His unconditional promise He made to Abraham (Genesis 12).

Two things – God is calling you today to come out of your background and follow Him. He will guide and direct your steps. God says and promises you will become a blessing in this world. God has big plans and purposes in your life. He has in store for you a good future, hope, and blessings. Secondly, God will be exalted in your sufferings, trials, and problems. He will get glory out of all your circumstances. Come out, stay focused on God, and see what mighty works He has in store for you.

Got a moment for today’s prayer? Father in heaven, I believe in the tremendous and matchless power you have. I believe you created the heavens and the earth. I worship you, Lord. Per your calling, I come and accept your Son, Jesus Christ, as my savior and Lord today. I believe He died and rose again for all of my sins. I call upon the name of Jesus Christ for salvation and deliverance. In Jesus Christ’s name, I pray. Amen. “ 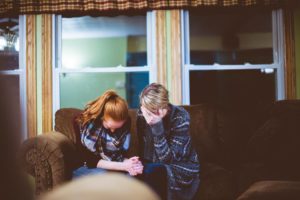 Your wonderful miracle and answer to prayers didn’t happen, yet? What would you do?

Your wonderful miracle and answer to prayers didn’t happen, yet?[...]