“Now, faith is the assurance of things hoped for, the conviction of things not seen. By faith, we understand that the universe was created by the Word of God so that what is seen was not made out of things that are visible.” (Hebrews 11:1)

A most critical example of faith was evident in the life history of the teenage girl in Israel, the mother of Jesus Christ, Mary. A perfect example for us to follow. In heaven, God said to the angel Gabriel this- Gabriel, the eternal plan of the redemption of human beings was going to start now, and then he commanded him to go and announce the most important message ever heard on this earth to this girl called Mary. Mary received the Word of God as it is. She showed the actual example of faith toward God, didn’t she?

Faith is essential and foundational to everyone. Hebrews 6 says faith is one of the foundations of the Christian life. Everyone has faith in something. We live in a period when there is a vast atheist movement happens. The atheists attack faith and mock and ridicule Christians because we believe in a God we have never seen. However, they need more faith to believe in what they believe. They also believe in something they have never seen. They believe in a big bang that happened millions of years ago that brought the universe into existence. They did not see it, and no one ever saw it, but still, they have faith in it. They also have faith in a single cell amoeba that, in their imagination, came out of the sea, which resulted in thousands of species and creatures that we see today. To me, atheism warrants more faith to believe in such a senseless phenomenon. Today’s famous and well-known atheists have never seen it with their eyes. Moreover, nobody saw it. However, they still have faith in it. Interesting right?

Beloved, the big bang would not result in such a designed, organized and beautiful universe we see around us. Sun, moon and stars and its chores and courses, earth’s seasons that follow one after another in an organized way, the birds, the sky above us and millions and millions of stars and galaxies all working in its ordained path happened not because of the big bang, but because of an intelligent creator God’s voice behind it. The first book of the Bible called Genesis explains it all. It was God’s Word and His voice that created such a designed and beautiful universe around us. (Genesis 1).

Beloved, our today’s insight says, “Faith is the assurance of things hoped for, the conviction of things not seen. By faith, we understand that the universe was created by the word of God so that what is seen was not made out of things that are visible.” Indeed, the universe was created by the Word of God.  Ralph Waldo Emerson said this, “All I have seen teaches me to trust the Creator for all I have not known.” Beloved, this is my conclusion -Because God created such a beautiful, organized and design filled universe around me because God formed me meticulously and supernaturally when I was in my mother’s womb as the scripture affirms, I can trust God that He would bring beauty, order, and design out of life when I put my faith in Him.

Got a moment for today’s prayer? Pray after me. “Father in heaven, I believe you are the creator God who created this beautiful, organized, and design filled universe around me. I give my life to you. Please take my life and order beauty, order, and design to it so that you will be glorified and magnified throughout my life. I place my faith in Jesus Christ, Your Son, who came to this world and died in my place for all of my sins. I accept Him as my savior and Lord. In Christ’s name, I pray. Amen.” 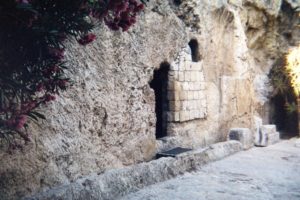 On this Easter season, remember Humanity’s hope for the future[...]

“Choose for yourselves this day whom you will serve, whether[...]