There is no arm twisting required to make us believe God is real and He exists. Why? There is ample evidence that proves the existence of God.

The DNA codes point to the creator God.

Discoveries of DNA points to the conclusion that there is a higher intelligence behind it. An intricate computer program made by intelligent people resembles the DNA in our cells. They both look similar. A computer program consists of a series of zeroes and ones called binary codes likes these 110010101011000. They write like an instruction manual with a purpose about what to do. The way these binary codes are sequenced instructs the computer what to do, and it works correctly according to its sequence and order. The DNA codes in our cells work the same way. The DNA code consists of four chemicals. The scientists abbreviated CGTGTGACTCGCTCCTGAT.
It’s made up of four chemicals that scientists abbreviate as A, T, G, and C. These are arranged in each human cell like this: CGTGTGACTCGCTCCTGAT and so on. Every human cell has three billion of these letters. In short, the DNA code is a three billion letter program instructing each cell to act in certain ways. It is an instruction manual like computer binary codes instructs the computer. Without a highly intelligent being called God arranging, sequencing and ordering the DNA codes, it would never happen and function inside of our cells. A computer program never automatically happens. An intelligent fellow must create it. God created the DNA codes inside us being the supreme intelligent creator.

For additional reading, refer:
https://www.everystudent.com/wires/Godreal.html
Only the Bible says how this happened. No other book would describe what happened inside the womb of our mother. It says, “For you (God) created my inmost being; you knit me together in my mother’s womb. I praise you because I am fearfully and wonderfully made; your works are wonderful,
I know that full well. My frame was not hidden from you when I was made in the secret place..” (Psalm 139).

The creation around us and the universe has a sudden beginning. If so, is it a big bang or God’s voice that set things in motion?

Scientists agree there was a definite and singular start to all that exists. The beginning of the universe, space and even time had a definite beginning. In other words, the universe had not always existed. It had a starting point. What caused it? They say the universe began because of an enormous and explosion of light and energy. They call it the big bang. If it started with a big ban instantly, how do we explain the organized and harmonized behavior seen in our world? An intelligent being has to be behind it all to function the universe in such an organized and orderly fashion.  The distance of the earth from the sun and moon are correctly positioned to avoid problems like freeze and burnups. Even while it rotates around the sun at a speed of sixty-seven thousand miles per hour, it remains in its perfect distance. Earth remains in its perfect distance from the sun even when it rotates around the sun at a speed of nearly 67,000 mph. A perfect gravitational pull comes from the correct distance and the size of the moon. This creates perfect ocean tides and movements avoiding the stagnation of ocean water. “The ocean covers more than 70 percent of the surface of our planet. It’s hard to imagine, but about 97 percent of the Earth’s water can be found in the oceans.”

Such gigantic sized ocean is restrained and contained by the perfect distance and size of the moon so that it would not spill over to the earth. These are intelligently designed and purposely implemented. A designer God is behind all such wonderful things.

The universe is in operation by consistent and natural laws, and this gigantic machine called the universe obeys the law.

The universe is law-abiding is a severe puzzle to many people. The Nobel Prize winner, Richard Feynman, said, “Why nature is mathematical is a mystery…The fact that there are rules at all is a kind of miracle.” (Richard Feynman, The Meaning of It All: Thoughts of a Citizen-Scientist (New York: BasicBooks, 1998), 43). The scientists are consistently thinking the question of why the universe is so orderly and sufficiently reliable. It did not have to if it was the result of a random explosion called big bang. The whole universe obeys rules and it is very systematic and routine in its functions. Listen to what to Bible says in Colossians about who hold all things in the universe in this fashion. It says, ” For in him (Jesus Christ, the Son of God) all things were created: things in heaven and on earth, visible and invisible, whether thrones or powers or rulers or authorities; all things have been created through him and for him. He is before all things, and in him, all things hold together. NLT says, “He (the Son of God, Jesus) existed before anything else, and he holds all creation together.” It is His mighty hand that holds together all in its place in an orderly fashion. Hebrews 1:3 says, “He (Jesus) upholds the universe by the word of His power.”

Finally, I want to bring to your attention; our conscience and all around us has a stamp of God in it. No excuse possible.

Bible says in Romans 1:19, “They (people) know the truth about God because he has made it obvious to them.” Did you ever think why the atheists are so relentlessly attacking the reality and existence of God? If they knew there is no God, why they are so busy talking and criticizing the reality of God? If no God, why bother? The truth is – God is chasing them to know Him personally. Evidence of the existence of God is so many in front of people’s eyes every day. Romans 1:20 says, “For ever since the world was created, people have seen the earth and sky. Through everything God made, they can clearly see his invisible qualities—his eternal power and divine nature. So they have no excuse for not knowing God.” Man cannot escape the thought of God because all around and inside them are pressing them to think about God.

God was pursuing Malcolm Muggeridge, CS Lewis, Marilyn Adamson, and many others, and finally, they accepted the reality of the existence of God. They became the preachers and teachers of the Bible.

God will never force us to accept Him. However, when you respond to the ample evidence, you will be liberated to the true freedom. Jesus said to those who believed in Him this, “you will know the truth, and the truth will set you free.” The truth that set you free is the acceptance of the reality of God and the way you can have a loving fellowship with Him. You will come out of the bondage and will be filled with divine joy.

Let me stop after saying one more thing. I challenge you to take a long look at Jesus Christ if you want to know the reality of God. Throughout the world there are many religious leaders. Muhammad, Moses, Buddha, Hindu teachers are few examples. Some of them are called prophets. However, no one listed above claimed to be equal to God. Do you know the only one in the whole history who said He is equal to God is Jesus Christ, the Son of God? He said look at me if you want to see God. Jesus said anyone who has seen me has seen the Father.” John 14:9. Jesus also said, “The Father and I are one.” John 10:30. The Bible says this about Jesus, “He is the radiance of God’s glory and the exact expression of His substance.” Hebrews 1:3. This is what differentiates Jesus from all other so-called prophets or religious leaders. There is no reasonable comparison to Christ out in this world. You will find none. Jesus Christ is the Son of God who came to rescue us from our sins and reconcile us with God the Father. He said, ““I am the way and the truth and the life. No one comes to the Father except through me.” There is no way other out there to come to God and have a loving fellowship and relationship with God. None. Only Jesus Christ. No need to blame me for my narrowness. I did not say this. Jesus Christ said this. I am just conveying the truth to you. No other person ever made such claims in human history.

Beloved, you can accept the fact and come into the light of God by looking at and accepting Christ as your savior, or you can ignore it and continue living in darkness. However, the truth remains the same regardless of your response.

God pursues you by inviting you to come to Him. He said, “I have loved you with an everlasting love; Therefore I have drawn you with loving-kindness.” It is His everlasting love and loving kindness that draws you to Him. He spared His eternal one and only Son, Jesus Christ, to rescue you from your darkness and bondages and draw you to Himself. Jesus the savior who died in your place and rose again for your justification is now knocking at the door of your heart. Will you accept Him as your savior and Lord and enter into His heavenly joy, peace, blessings, and eternal life?

I can help you to get connected to God by a small prayer.

“Father in heaven, I accept the fact that you exist and you are real. Sorry I have ignored and even said things against you in the past. Forgive my sins. I know you draw me with your everlasting love and kindness. I accept Your Son, Jesus Christ, as my savior and Lord. Please save me now. I thank you for coming into my life. In the name of Christ, I pray. Amen.” 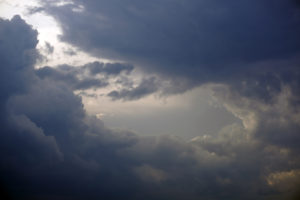 Weekly Insight -can we learn from history? It is not late for God’s grace and mercy if we seek Him.

“For the Lord has caused her grief  Because of the[...]