Take that next step in this New Year.

“Now there were four men with leprosy at the entrance of the city gate. They said to each other, “Why stay here until we die? If we say, ‘We’ll go into the city’—the famine is there, and we will die. And if we stay here, we will die. So let’s go over to the camp of the Arameans and surrender. If they spare us, we live; if they kill us, then we die.” (2 Kings 7:3-4).

In one of Dr. Tony Evan’s book, He said this – God hits a moving stone/target. Dr. Tony Evans is a DTS graduate and the pastor of the Oak Cliff Bible Fellowship which is a Bible-believing and Bible teaching megachurch in Dallas, Texas.

There was a big famine in Samaria, in the city of the Northern Kingdom called Israel. This happened when Joram, son of Ahab ruled there about 850 BC. He like his father Ahab did evil in the sight of the Lord. Bible says Joram clung to the sins of Jeroboam by which he made Israel sin. Bible says God allows natural calamities because of the sins of the rulers and people of the land when they live in sin without repentance. You see, we are accountable to God for the sins we commit against Him. Famine was so severe that a donkey’s head was sold for eighty shekels of silver. A quarter of the cab of seed pods was sold for five shekels. In today’s price 80 shekels is about $420 or Rs. 30,000 to buy a donkey’s head. The famine was so great that according to verse 28-29 a woman even cooked his son and ate. People did untold and never heard atrocities on those days to survive.

Our today’s insight says during this severe famine time, there were four men with leprosy at the entrance of the gate. As outcasts of the community, they encountered more difficulties than others. They said to each other why do we stay here until we die? They decided to go over to the enemy camp. Four lepers stepped out and took the next step in desperation. They knew their condition was hopeless and going to die. They said we would go into the city and surrender to the enemies, the Arameans. They knew they have nothing to lose. If they remain where they were, they were going to die in famine, and if they go inside the city and famine there also, they would die. However, if they show mercy to them, they would live, or we die anyway.

When they entered through the gate, to their surprise, the camp was empty. No one was there. God works in mysterious and miraculous ways. The Syrians (Arameans) fled from the camp leaving their supplies and valuables including donkeys and horses because God sent fear on their heart. Lord caused them to hear the voices of a big army, horses, and chariots and they feared the king of Israel hired Hittite and Egyptian kings to attack them. The four leprous men entered their tents and ate and drank. They took silver, gold, and precious items and began to hide them. They went back and got more.

Then they thought what they are doing is not right because the people in the nation are dying in a famine. They went and reported to the city gatekeepers. King of Israel sent officers to check it out. All the people went and plundered the camp, and all were filled with food and sufficient resources.

Dearly beloved, you may be in a frustrating situation, or you may be in a pretty good one. However, I need to tell you this – you need to move forward and take the next step by leaning on the Lord. Four leprous men had to step out in faith to see the wonder-working power of God. They would not have experienced the hand of the Lord, had they continue sitting at the city gate. God exercises your faith when you take that next step in faith. Do not allow yourself to be stuck.

Got a moment for today’s prayer? “Father in heaven, I take the most important step to come to you in prayer and I accept Jesus Christ as my savior and Lord. I believe God sent Him to this earth to save me from my sins. I believe Jesus died and rose again for all of my sins. I am sorry for my sins. Please forgive me and save me. Please give me eternal life in heaven with you when I die. In Christ’s name, I pray. Amen.”

Life is like a vapor that vanishes too soon. 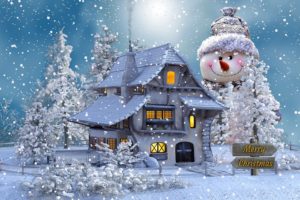 Season of Joy and Glad Tidings