In this postmodern society, do you still believe God created all?

In this postmodern society, do you still believe God created all?

Sam, in this post-modern society, do you still believe God created all?

Yes, I do. I am not going to believe a mere human hypothesis called ‘evolution’ which is one of the most senseless ideas formed by the fallen men and has never been scientifically tested, observed or verified. No person with common sense can accept what the evolution says. We cannot even agree with evolution as a theory. It is not even a theory. There is a distinction between a hypothesis and a theory. A hypothesis is an explanation that is proposed. Then the hypothesis should be tested and observed scientifically on a going basis. To say something is a theory, at least the proposed hypothesis should have been tested well and supported widely based on a long observance, verification, and ongoing testing.

Evolution has never been scientifically verified, tested and not observable. No one lives today, or the people lived in Darwin’s day was present or living at the formation of life in the beginning. Therefore these false ideas of evolution are never adequately observed, verified or even tested. To me, evolution is just a hypothesis that was not substantiated. It is not even a theory. Yet these nonsense thoughts are injected in the minds of our children in schools and colleges. It is wrong, and such a curriculum in schools and colleges must be opposed. It is poisoning the minds of our younger population.

To think one day from non-living matters the living things came up is a ridiculous idea that thinking and rational people cannot wrap their mind around. Life is miraculous. Not just the life but everything we see around us, the land, mountains, oceans, rivers and animal, bird and crawling creatures and all we see up on the sky are miraculous, and only Bible gives answers to our question. It emphatically says God created all. Bible tells us we all, the humans came from one parent – Adam- who was created by God.

When the evolutions say life today was an advancement from a simple bacteria, single-celled amoebas, it demands more faith to accept and believe such unobserved and not scientifically tested hypothesis. To me, faith in God who created all makes just more common sense than believing in evolution. You see finally the question is this. Whom do we going to believe? The Word of God or the word of man? When evolution says the man came out of single cell bacteria called amoeba, remember such a phenomenon of life transfer was never observed or documented anywhere in human history. A repeated phrase can be read in the Bible after the creation of each kind of species by God and that is this, “according to their kinds” (NIV), according to their kind (NKJV) or “each producing offspring of the same kind.” (NLT). What is this means? Particular living creatures -animal, birds, man or whatever may be, it can reproduce only its own kind or offspring of the same kind. A bacteria cannot and would not produce a rat. Monkeys produces only monkeys. A dog produces just its kind or offspring only, which is another dog. No living creature is able to produce another species.

Beloved, there is no verifiable or documented observations ever discovered any time in human history saying monkey transferred to a man or any such things. It is just not there. Evolution is people’s attempt to discredit the truth and existence of the creator God. Moreover, the idea of evolution is supported by the power of the devil behind it. Devil will do anything to discredit God, and these men are just the culprits in his power.

Don’t you think it takes more faith to believe in such a ridiculous hypothesis than believing in God who created all we see? You see Bible says we, humans are made in the image of God, and that is why we are entirely different from any other animal species. Because we are made in the image of God, we have body, soul, and spirit and in the spirit, we can relate to God. Man is a spiritual being. But animals are not. We are not evolved from an amoeba or bacteria. We are not the offspring of monkeys. We are not evolved, instead, the Bible tells the truth that we are fearfully and wonderfully created by God (Psalms 139:14). God knitted us together in our mother’s womb, the Bible declares (Psalm 139:13).

God says in Genesis 1:1, “In the beginning, God created the heavens and the earth.” It also gives an account of creation in chapter 1. It will let us know how all we see came into being. Then verse 26 says God created man in His image, according to His likeness… male and female He created them. Bible also says the truth in Psalms 33:6, “By the word of the LORD the heavens were made, their starry host by the breath of his mouth.”

Beloved, you mentioned we live in the postmodern society. However, it does not matter we live in postmodern or antique civilization, the fact is fact. You see, the fact does not change over time. In contrast, human ideas, opinions and discoveries changes. The evolution hypothesis itself changed its position over the years. However, God’s truth and fact stand firm regardless of the time periods we live in. It stands sure regardless of our national, cultural, educational and language distinctions. God Himself claims I created the earth, man and the whole universe. And He placed God awareness and his stamp in all of His creation and inside us. Listen to what Bible says in Romans 1:20 -since the creation of the world God made known to us His eternal power and divine nature and this we all can understand from the things He made. Look at the sky, stars, life, and nature around us. Look inside us to understand our God-awareness and His seal of ownership inside us. We are people without excuse if we discredit and dishonor God and His truth. Psalms 14:1 says this, Only fools say in their hearts, “There is no God.” They are corrupt, and their actions are evil; not one of them does good! The reason why people ignore the existence of God is just that they want to live an immoral and wicked life. They desire to do wrong and do not want to do the right things. Therefore desiring to do and enjoy immoral and wicked things, their foolish heart says there is no God.

A war or battle is going on in human minds. This spiritual war is between the Word of God and just man’s word. It is time to accept the challenge as it is because ultimately it is a spiritual war or battle. And therefore stand firm in the truth of the word of God. 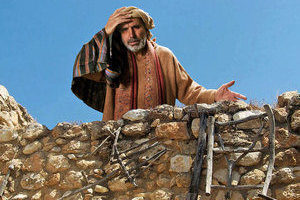 The Lost Son thought he was missing the fun of his life. Read on the eternal truth about God, your perfect Father in heaven.

The Lost Son thought he was missing the fun of[...]

Church in God’s plan We are currently living in an[...]